Reuben and Xavier LeBlanc were among a rowdy crowd of Canadian fans dressed in red and white who marched towards the stadium where Canada played its first FIFA World Cup match in 36 years on November 24 in Al Rayyan, Qatar.

Originally from Atlantic Canada, the LeBlancs have lived in Qatar for four years.

The energy of the crowd grew as the cheering fans held a dance party before heading into the stadium.

Despite a tough 1-0 loss to Belgium, many football fans celebrated Canada’s performance.

Canada failed to score despite having more chances to score – including a missed penalty by Alphonso Davies in the 10th minute. 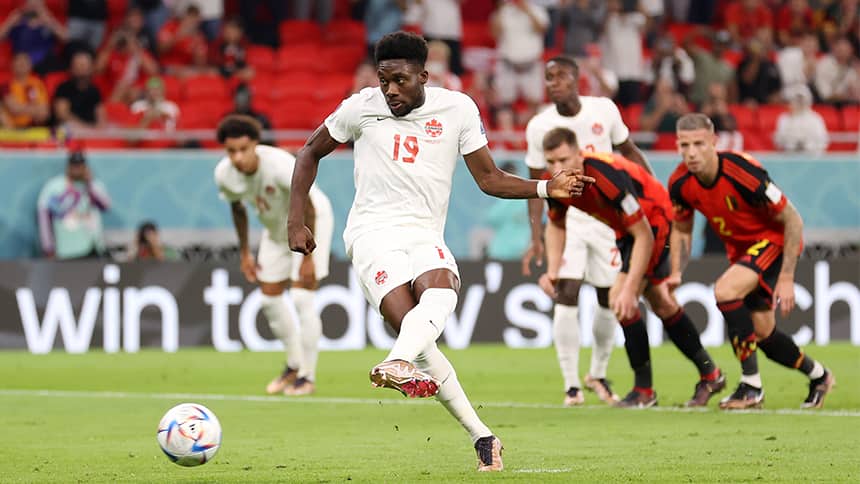 Alphonso Davies takes a penalty against Belgium after an early foul in the 10th minute. (Credit: Catherine Ivill/Getty Images)

A sell-out crowd of 40,432 fans cheered as the two teams faced off in their opening match.

“To see so many Canadians here and walk away proud, I’m sure,” said Canada head coach John Herdman. “Pride and feeling like we are [a] soccer nation.”

Some Belgian players said they were disappointed with their performance despite the win.

“I just don’t think we played well enough as a team, especially in the first half,” said Belgian star Kevin De Bruyne.

Children react to the game

Xavier, 13, said Canada put on a dominant performance but not enough to score against one of the world’s top goalkeepers.

“They played very well,” he said after the game. “They had a lot more possessions, just not the right shots.”

His brother Reuben, 10, said he was proud of Canada’s efforts.

“It was great,” he said. “I’m so glad we came. They definitely did their best.” 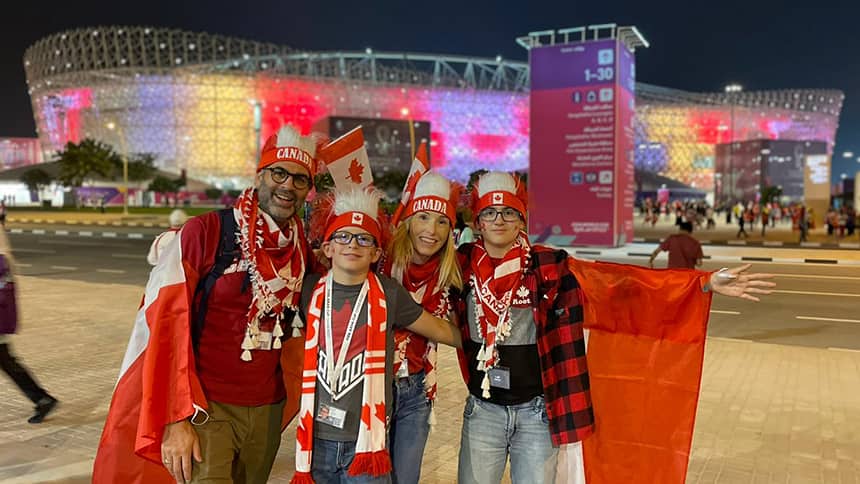 Xavier and Reuben pose alongside their parents outside the Ahmad Bin Ali Stadium in Al Rayyan, Qatar. (Image submitted by April LeBlanc)

What’s next for Canada at the World Cup

This was the only opportunity for the LeBlanc family to see the World Cup action in person.

They will continue to watch Canada on TV for their two remaining games in Group F.

Canada will play Croatia on November 27th and Morocco on December 1st.

The top two teams in Group F advance to the next round of the tournament.

Of course, the FIFA World Cup is about more than just who wins and who loses.

Click on this article link to learn more about some of the controversies surrounding the Qatar event.

Also, click play to find out why Alan McDougall, a history professor at Ontario’s Guelph University, says some fans may be boycotting these games:

﻿﻿Do you have any further questions?﻿Would you like to tell us how we are doing? Use the Send Us Feedback link below. ⬇️⬇️⬇️

With files from CBC Sports