Thanks to Black Friday you can get a download code for FIFA 23 on Xbox Series X with a 30% discount.

There’s never been a better time to start your digital football career as Amazon is offering a FIFA 23 on Xbox Series X download code at a fantastic 30% discount, taking the price from £69.99 to just £48.95 £ decreases. It is important to note that this is a download code and not a physical copy of the game. So you should look elsewhere if you’re hoping to show off your games collection in the real world.

If you don’t like this offer and want to see the other Black Friday bargains currently available, be sure to check out our best Black Friday deals. We make sure this page is updated every time a new awesome tech deal comes out so you can easily find the best discounts.

FIFA 23 is the latest game in the FIFA series and features HyperMotion2 technology that allows for a more natural transition between ball control and shooting, smoother gameplay and higher quality animations.

The animations in FIFA 23 are also more varied than in the predecessors of the series, making the gameplay more realistic and authentic. 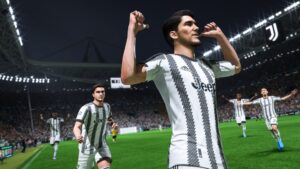 Since we are already in the middle of football season why not get a download code for FIFA 23 which is now 30% off in honor of Black Friday.

Players can leave visible marks on the grass after sliding into someone else on a wet day, further adding to the realism of this title. And all fans of Apple TV Plus’s Ted Lasso will be happy to know he’s making an appearance in the game, as will the AFC Richmond soccer team.

And for the first time in EA Sports FIFA history, you can now play as a women’s soccer team. These teams feel distinctly different, it’s just a shame you can’t play as women’s teams in career mode as well.

As we can see from the FIFA 23 price history below, this game hasn’t received any significant discounts yet and we doubt the price will stay that low in the coming weeks. So if you’re interested in starting a new soccer career with stunning graphics, grab this now before it’s gone.