FIFA World Cup 2022 LIVE – Matches from Day 5 of the FIFA World Cup: The 2022 FIFA World Cup is still in its first week and fans have already experienced all kinds of emotions. So far, the giants have beaten the minnows, the underdogs beat the favorites, and there have been some unexpected draws too. On Thursday, football fans will be treated to four exciting games with superstars like Cristiano Ronaldo and Neymar Jr. in action. Watch FIFA WC LIVE streaming on JioCinema and FIFA WC Points Table LIVE updates with InsideSport.IN

The day begins with Switzerland playing Cameroon from Group H at 15:30 IST. In the second game, Uruguay meets Korea Republic at 18:30 IST. As the sun sets and evening falls in Qatar, Cristiano Ronaldo’s side are poised to take on Ghana in their second straight Group H game. As the last offer of the day, five-time world champions Brazil take on Serbia, and the match starts at 00:30.

In the first of four games, Switzerland meets Cameroon in the opening game of Group G at the Al-Janoub Stadium on Thursday. The Swiss are the favorites to reach the knockout rounds and they need a win to do that. All eyes will be on stars Granit Xhaka from Switzerland and Eric Choupo-Moting from Cameroon. Switzerland was undefeated in the group stage of the 2018 World Cup.

On the other hand, Cameroon have failed to progress beyond the group stage in the last five editions. The African nation has its own problems. This will also be their first encounter against Switzerland. They are not at their best at the moment and have only won one game in their last five. Cameroon must produce an outstanding performance to overthrow Switzerland. On paper, Switzerland looks like a better team given the current encounter. However, Cameroon can take inspiration from Saudi Arabia.

The second upcoming match is between Uruguay and South Korea from Group H at Education City Stadium. Two-time world champions Uruguay have all the star power in the world to face South Korea’s challenge. The likes of Luis Suarez, Edison Cavani, Maxi Gomez and Darwin Nunez have been in excellent form this year. Uruguay’s defense also did well, conceding just two goals in their last nine games.

With an exciting mix of youth and experience, Uruguay are set to reach the round of 16. However, they must first overcome South Korea’s challenge. The team misses its star striker Heung-Min Son, who was injured in the Champions League. The team’s defense has strengthened, conceding just 3 goals in their last 10 AFC Playoff qualifiers. South Korea has shown some sparks but has been inconsistent. Uruguay is the clear favorite in the competition. 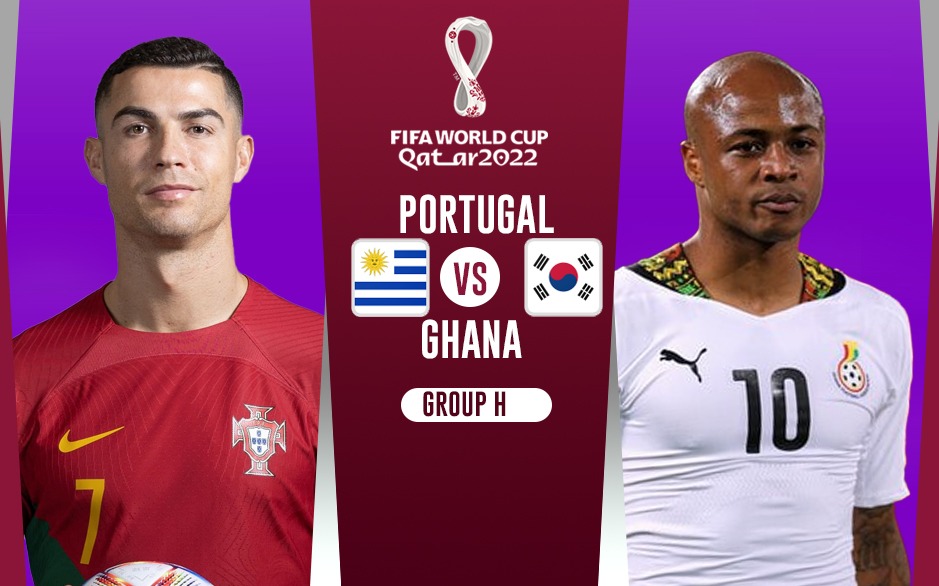 Cristiano Ronaldo and Portugal meet Ghana in the 15th game of the World Cup. The game will take place on Thursday at the 974 Stadium in Doha. Ronaldo will be the center of attention for the umpteenth time, especially after his contract termination at Manchester United. CR7 has ensured his personal relationship with United will not impact the team’s performance. Portugal has exceptional talent.

The 2016 European champions are expected to have a comfortable opening game against Ghana. For Ghana it is the return to the World Cup stage after 4 years of exile. If they make it to the round of 16 it would be a huge achievement for the Black Stars. Anything less than a place in the quarter-finals is a disappointment for Portugal given their talent.

The final game of the day is a Group G game at Lusail Stadium on Thursday. Brazil, considered one of the favorites to win the title, are in glowing form at the tournament. The Selecao have won 14 of their last 17 games and drawn only three. All eyes will be on Neymar again but you can’t take your eyes off Vinicius Junior. Tite’s men are No. 1 in FIFA and have rarely struggled in qualifying from the group stage. Brazil outclassed Tunisia 5-1 in their last game, sending a stern warning to all sides in the competition.

The mood is beautiful 🇧🇷pic.twitter.com/l84wdi8HDQ

Their first match at the FIFA World Cup will be against Serbia. The Eagles, who are ranked 25th in the world, impressed everyone with their exploits in UEFA qualifying. The team features some excellent players like Aleksandar Mitrovic, Luka Jovic and Dusan Vlahovic. Resilience will be key for Serbia to secure a draw, which should be a great result for them.

Brazil met Serbia twice and emerged victorious both times. Unless Serbia plays over their skin, Thursday’s record is unlikely to change.

You just know he’s gonna pull this out 😎 pic.twitter.com/5bbblwyS5r

FIFA World Cup LIVE Streaming: The broadcaster Viacom18 shifted the coverage from Voot to Jio Cinema in the run-up to the tournament. The new regulation came into force after the start of the 2022 FIFA World Cup.