SPORT AT HAND • The day before Thanksgiving is a great day for fasting. To make room for turkey, stuffing, mashed potatoes, green beans, macaroni and cheese, pumpkin pie, bun, gravy, pearl onions and cranberry sauce. Wait, did we forget the most important part of the vacation?

• Would you like a hint? It’s in the name of the holiday. you know thanks And give. We’ll take care of the first tomorrow. Today we are in a giving mood.

• What about Oregon and Oregon State? How the hell doesn’t their rivalry game have a name yet? We weren’t thrilled with the decision to ditch the long-held Civil War moniker, but we understood the motivation. Football isn’t really war, and certainly not the bloodiest war this country has ever been involved in. 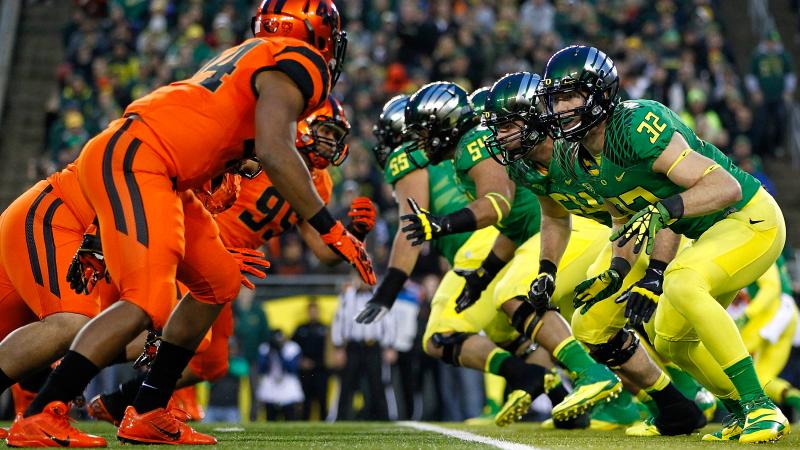 The name change was actually overdue. But how the hell did it take so long to find a replacement?

Just find out. How about the teams play for a live pine seedling every season? Each school builds a grove near their soccer field. If they win, plant the tree and Viola there, problem solved.

Heck, they can start planting trees for each of their previous wins in the series. Label them with the year and the score. Build a beautiful green space that references the state (excluding the area north of the California-Nevada border) for students to enjoy for the next few centuries.

Call it the Battle of the Fir. And everyone is happy.

• What’s first at the Apple Cup in this week? Will it be Washington State’s pressured defense or Washington’s high-profile offense?

Since these are the two most prominent aspects of each team, it’s appropriate that they get the bulk of the discussion. But will they really decide who wins?

More than likely yes. The team that gets its way when UW have the ball will likely be the team that lifts the snow-covered trophy late Saturday night. But let’s not forget another, often overlooked aspect that often decides such rivalry games: the special teams. From missed field goals to long kickoff returns, this rivalry had its share of pivotal moments when neither the teams’ offense nor defense were on the pitch. Can it happen again?

Only, we think, when trainers get too cute.

The Cougars’ Colton Theaker is able to kick the ball through the end zone on every break, killing any chance the Huskies have of making a big play in that regard. And Nick Haberer’s punts are consistently difficult to return because of their hang time. If he makes the decision to just kick the ball, the Cougars should be fine in that regard, too.

But it’s easy to think a big game can happen, as the pressure to win against your rival occasionally leads to head-scratching decisions. And disasters.

• If you are a college basketball fan, then maybe you should have decided a while ago to say goodbye to your family and spend the holiday weekend in Portland.

Okay, sure, the Maui tournament is on and, well, Maui. But that’s not what being a college hoop fan is about. But Maui.

Anyway, sitting in a gym or arena for 10 hours a day is what you should be craving this weekend. And that’s available in Portland. 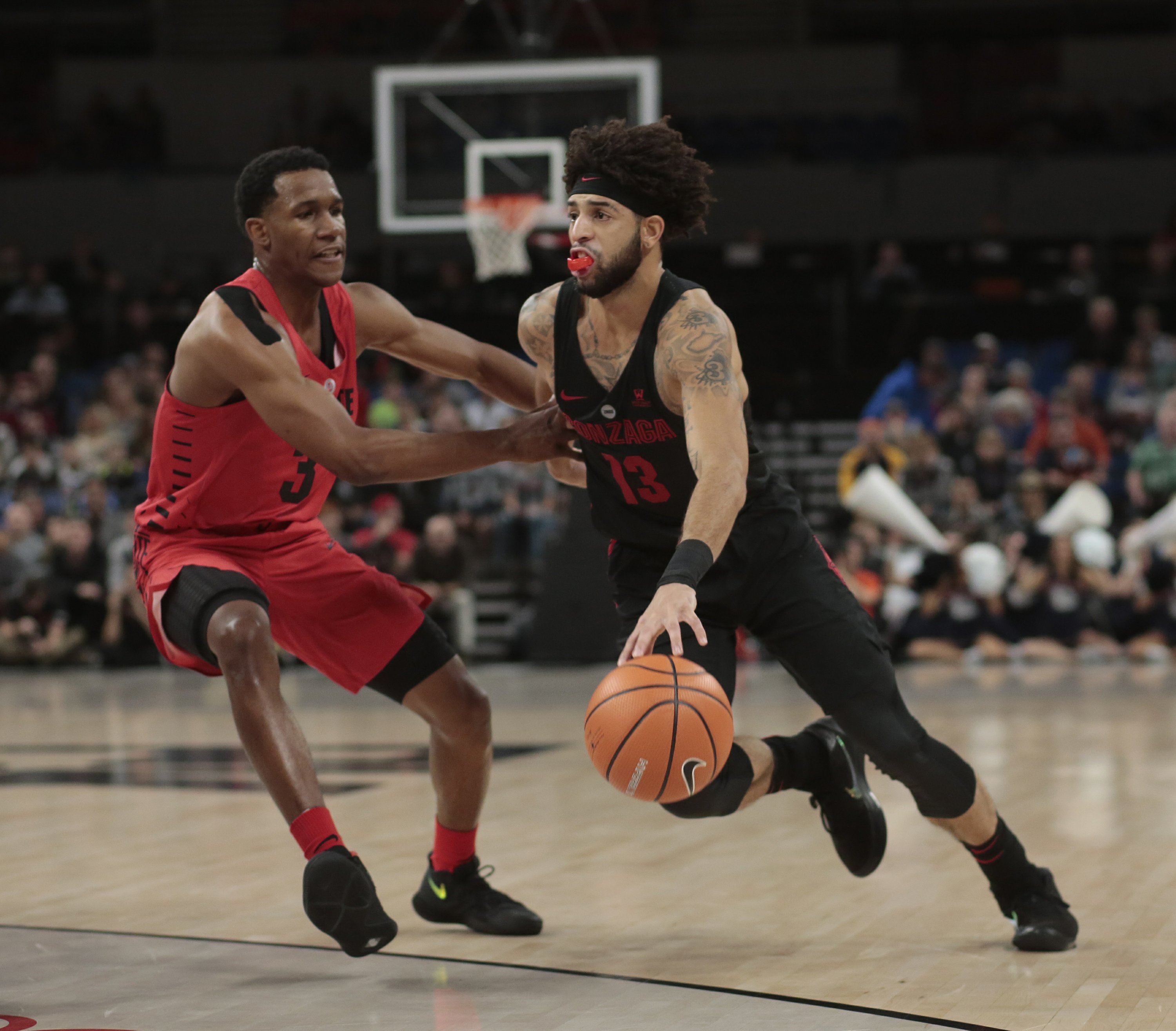 Starting tomorrow, there will be two eight-team men’s divisions of the Phil Knight Birthday Celebration Basketball Tournaments (as we call them here) and one eight-team women’s division in the world’s largest basketball-themed birthday celebration. Or at least in Oregon, home of Nike, Knight’s true gift to the world.

Games are played on Thursdays, Fridays and Sundays, with Saturday being free for each school’s football teams to play their final regular-season games. How nice of the tournament organizers. (Actually, it has to do with broadcast partners and their busy schedules, but we’ll stick with the generous gesture.)

Think about it. You couldn’t see every game, but you could see four top 10 women’s teams and seven men’s teams in the AP Top 25.

This is a basketball celebration worthy of thanks. 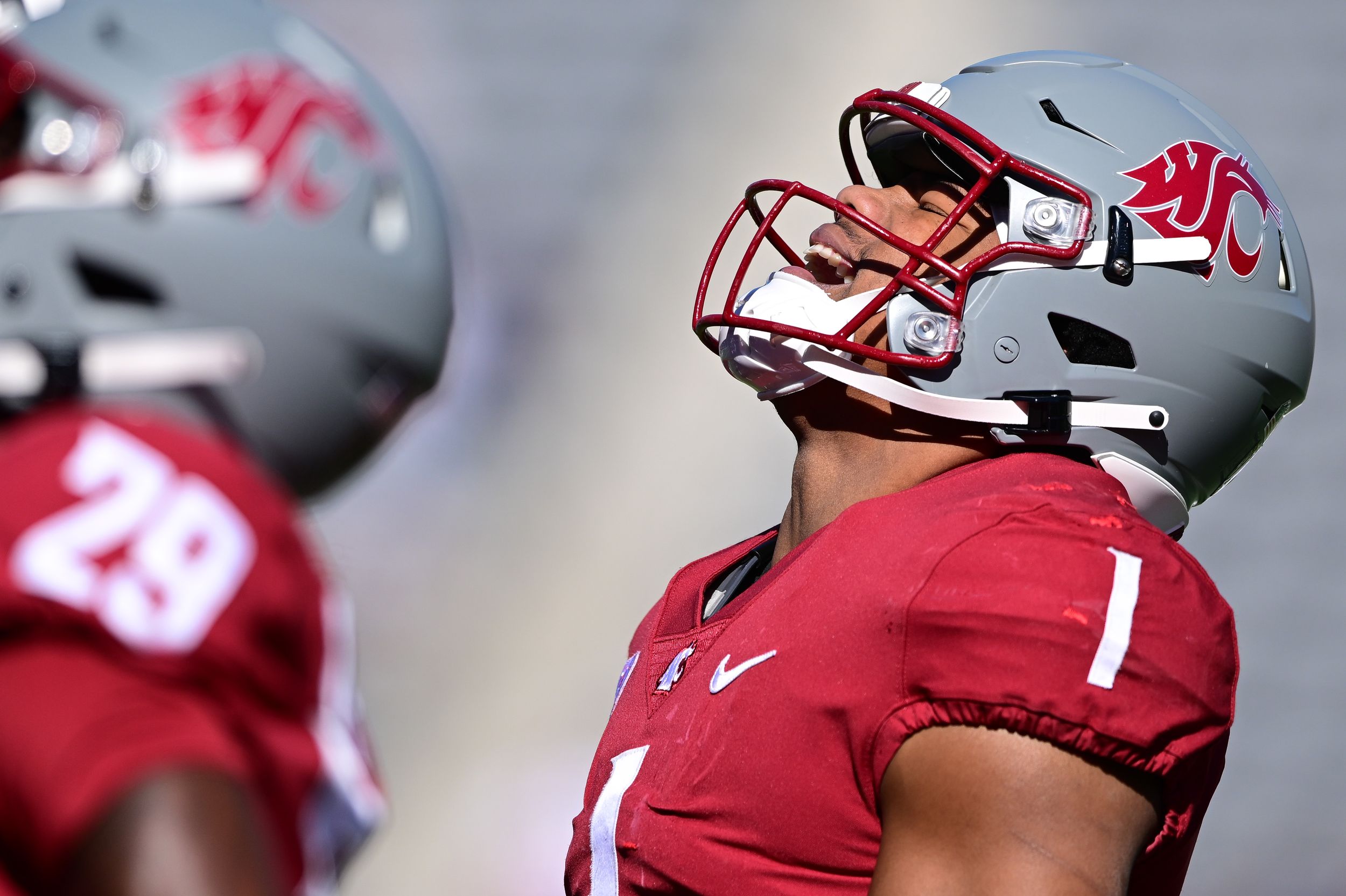 WSU: Yes, Cougar’s defense is really solid this season. A big part of the reason is Daiyan Henley, the senior signing from Nevada who yesterday became Washington State’s first Butkus Award finalist. Colton Clark, of course, has this story, as well as a notebook that not only covers Apple Cup news, but also touches on Senior Night. Wait, they’re the same this year. … Elsewhere in Pac-12 and college football, we can share Jon Wilner’s power rankings as they appeared in the SR this morning. … Washington soccer coach Kalen DeBoer had an exceptional first season. He was rewarded with a contract extension yesterday. Premature? Maybe not. … Heading into the rivalry game, Oregon is getting healthier, at least at quarterback. And there is hope at Oregon State, too. … With Utah next, Colorado will also honor its seniors. … The Utes haven’t produced many great quarterbacks. … The latest CFP rankings have LSU with two losses over USC with one loss. This is real SEC bias. The Trojans win and may still be eliminated. But a win over Notre Dame is a good start. … UCLA finishes Friday against California. … Arizona State can salvage at least part of its season with a win over a rejuvenated Arizona. … In the basketball news, Washington, like most schools, had pluses and minuses with the transfer portal. … Oregon State has a difficult schedule ahead of it. …Oregon is also in the Knight tournament. … Colorado is trying to toughen up. … Arizona’s defense resurfaced in a win over San Diego State. Next is Creighton. … Arizona State drove past Grambling. 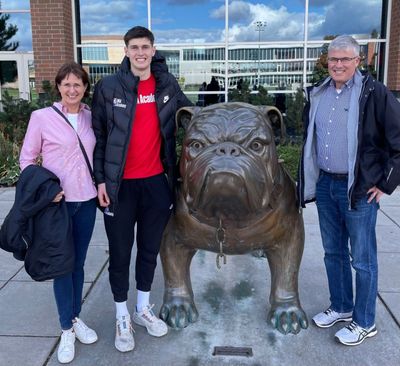 gonzaga: The Zags signed their first Australian high school men’s player of the last signing, Alex Toohey. He won’t be the first Australian to play at the school, of course, but the underpinnings of his trip to Spokane are quite interesting. Theo Lawson spoke to Toohey and shares his story. … Jim Meehan focuses on this year’s roster with this statistically-based look at the Bulldogs so far. … The Zags are the highest-ranked one-loss team in Athletic’s power rankings. … Elsewhere in the WCC, BYU is in the Bahamas where it meets USC for the first time. … Pepperdine meets UCLA.

EMU and Idaho: Around the Big Sky, Montana meets Southeast Missouri State in the opening round of FCS. … Montana State has a bye, so this week is about awards. … There will be a new era in football in northern Colorado. … On basketball news, Weber State clinched a win in Las Vegas. … Northern Colorado lost to Colorado Christian, who used to be coached by a good friend. … Sacramento State lost to UC Davis, which is in hoops in the Big West. … Montana won despite a few injuries. … Portland State is in the Knight tournaments and meets Gonzaga at 9:30 tomorrow night. 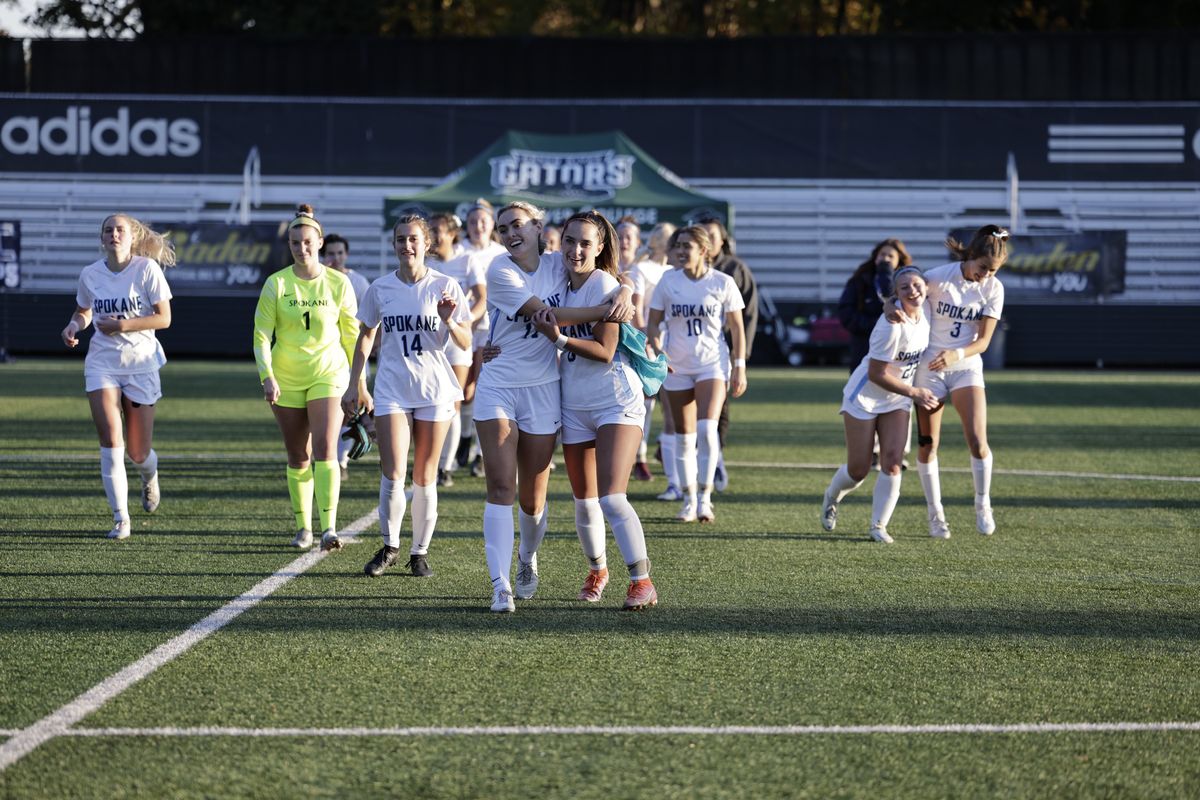 CCS: For the third time, the Sasquatch won the Northwest Athletic Conference Women’s Soccer Championship. Justin Reed has the story.

Preparations: A Mt. Spokane graduate led the Doane University football team and was honored for it. This news kicks off SR’s latest local sports column.

Seahawks: DK Metcalf was fined about $30,000 for everything he said to the officer in Germany. It was probably worth it. … Cornerback Tre Brown is back from his knee surgery and ready to fight for the starting spot again. 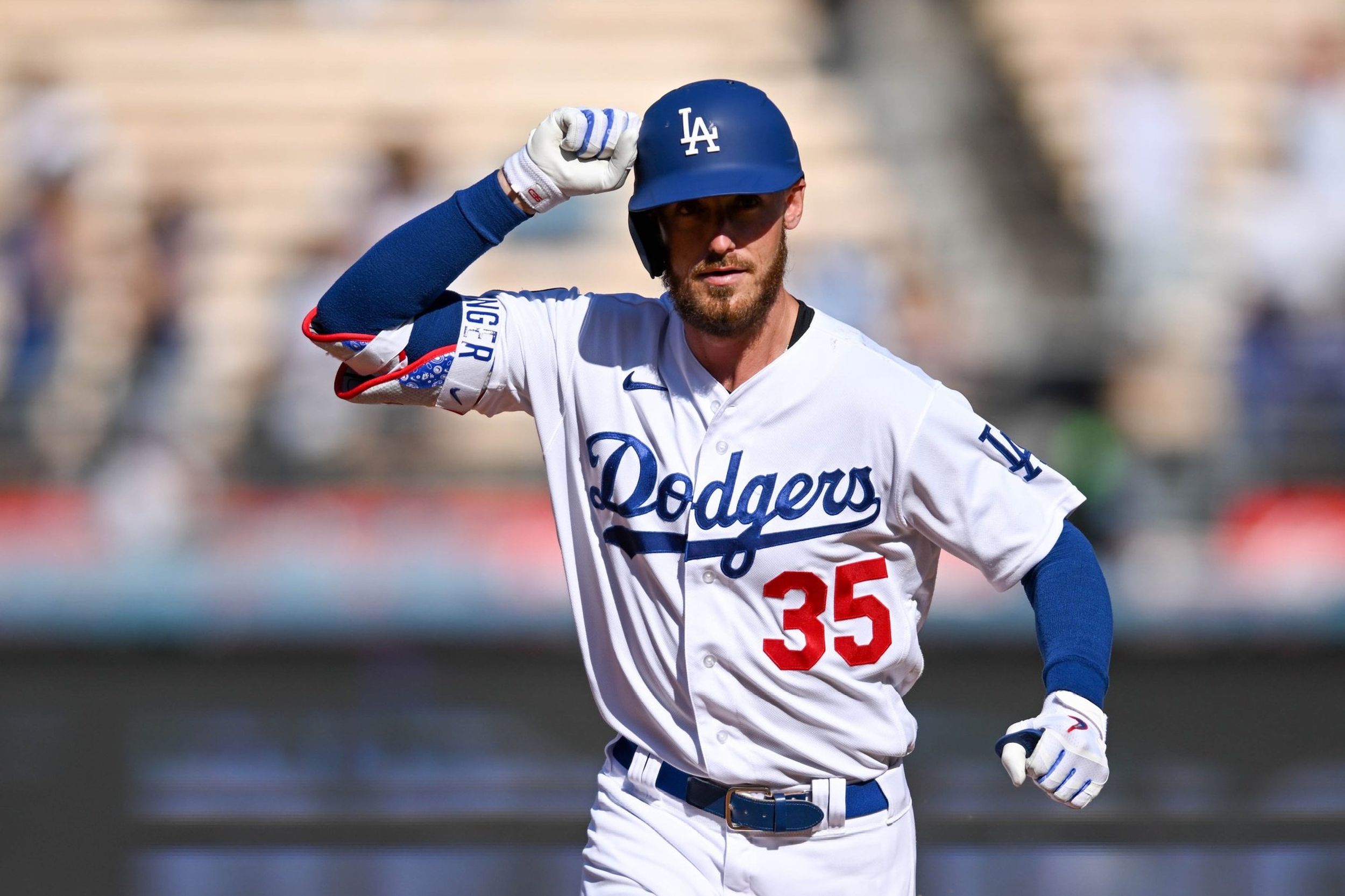 Sailors: Ryan Divish looks at who could fill in the M’s outfield. We’re still hoping for Cody Bellinger, but realistically see him playing somewhere else in 2023.

sounder: Seattle is being rebuilt this offseason. Renovation of the reception. Garth Lagerwey went to Atlanta.

Octopus: Seattle seems to be making the right moves these days.

• It was Carnitas for Taco Tuesday. Not just carnitas, but extraordinary carnitas. Wow. I guess Kim is up on her game right now. Next for their culinary skills? We’re taking Thursday off while we go to a local restaurant for Thanksgiving. See you later …